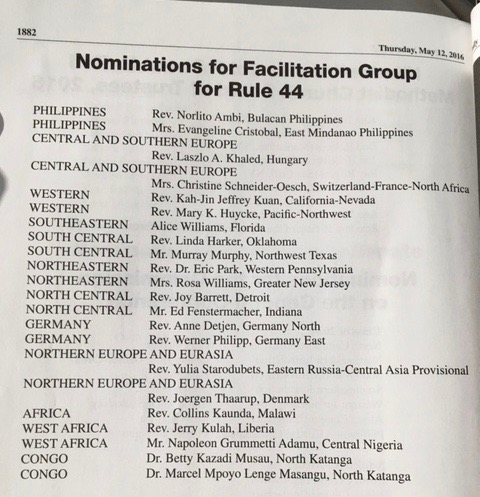 At our delegation’s time of prayer and conversation early this morning, Paul Morelli read to us some weighty words from pastor and author A.W. Tozer. Tozer’s words ushered us into a contemplation of the perpetual nearness of the sin of idolatry. According to Tozer, idolatry is not limited to the glorification of a literal, physical idol. Rather, idolatry is the willingness to abandon our “lofty opinion of God” in order to settle for an image of God that somehow truncates the greatness, the holiness, and the beauty of God’s character. As Tozer puts it, “the first step down for any church is taken when it surrenders its high opinion of God.”

I wonder, where do I sell God short in the way I conceptualize God? In the way that I pray? In the way that I make God less than God in my deepest thoughts? Where have I slipped into a functional idolatry in the way I quietly reduce God to little more than a divine best buddy who winks at sin? Or a coldhearted observer who merely watching my suffering and pain from a distance? Such questions bring me to the heart of an idolatry that I commit all to frequently. This morning’s devotions helped me to name and confess it.

At our morning worship service in the plenary room, Bishop Christian Alsted, of the Nordic and Baltic Episcopal Area, preached a powerful sermon that centered on Jesus’ encounter with a Roman centurion in Matthew 8—a soldier who is crying out to Jesus for a healing on behalf of his servant. Bishop Alsted suggested that this soldier’s counter-cultural willingness to reach out to Jesus is a Biblical reminder to us that the starting point of our deepest transformation, “is a willingness to subordinate ourselves to the revolutionary authority and healing power of Jesus Christ and to depend upon him for the healing of our church.” The Bishop’s words brought the Gospel afresh to my heart. It was an enlivening way to begin the day.

The remainder of the morning was devoted to a lengthy conversation and debate around proposed Rule 44, which I referenced in my last post. Just to remind you of the particulars, Rule 44, if approved, would have allowed delegates to experience extended time in smaller groups (no larger than 15 people) in which the more controversial legislation (such as legislation on human sexuality) might be discussed without the pressure of an immediate vote, thereby creating a safer and (hopefully) more hospitable context in which delegates might listen to one another’s hearts before having to legislate. It was a long and, at times, frustrating discussion about Rule 44 in today’s plenary—frustrating because of procedural quagmires and technological uncertainties related to who was permitted to speak and for what purpose. When it finally came to a vote, the Rule 44 proposal was rejected, 477-355.

Clearly, the General Conference was not ready to say a collective yes to this new process of discernment. While I respect the plenary’s decision, I am also saddened by it. The rejection of Rule 44 leaves me wondering where and when our denomination will create contexts for safe and desperately-needed conversations about hard and complex issues. At present, we seem to be far more eager to legislate our position than we are to listen to one another—far more passionate about casting a vote than we are about engaging the hearts of those who see things differently than we do. I love the United Methodist Church and it’s emphasis upon personal and social holiness, its devotion to personal piety and public acts of mercy, and its Christocentric vocabulary of grace. But there are issues before us that demand deeper conversations than a legislative plenary can accommodate. I was hoping that Rule 44 might have at least opened the door to such conversations, thereby enabling us to love one another more attentively, irrespective of the final legislative decision.

This afternoon and early evening were devoted to the work of the twelve legislative committees. All afternoon long, the 80-plus members of my legislative committee (Discipleship) were tremendously patient and gracious in dealing with one another as we settled into a shared process and a common approach.  It felt like the way church ought to be—a roomful of Jesus-followers who were willing to allow themselves to be slowed down for the sake of making certain that everyone present understood what was being said and what was being done.  It felt like a gathering of imperfect saints who were willing to subordinate expediency to relational attentiveness.  I was honored to be a part of it.