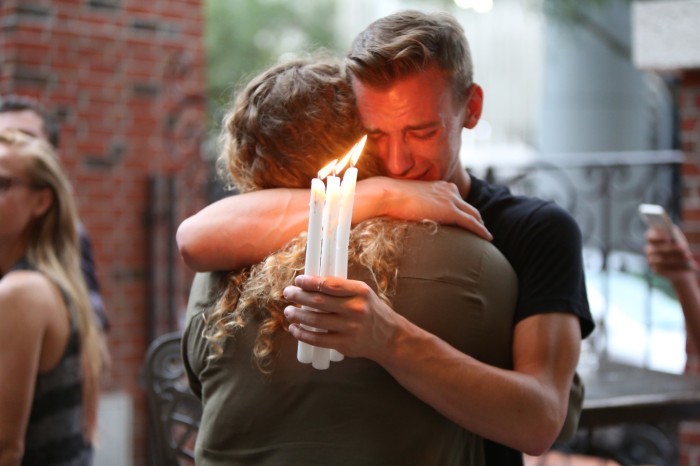 In the aftermath of Sunday’s mass shooting in Orlando, Florida, I am joining many of you in a heartfelt lamentation over many things: The violent and senseless ending of 49 precious and potential-rich lives; the heartache of grieving friends and family members who find themselves longing for just one more conversation with those voices that will never again be heard; the tendency to dishonor our collective grief by burying it under a bitter debate over things like sexual morality or gun control.

There is another lamentation, too frequently unnamed, that resonates somewhere in the hidden chambers of my hurting soul. It is a lamentation over humankind’s tragic tendency to allow distorted religious conviction to become a fuel for toxic hatred and unbridled savagery. Upon reading that last sentence, many will immediately call to mind radical Islam and its penchant for acts of terrorism. To be certain, violence grounded in a distorted expression of Islamic theism is a threat that the entire world must take seriously.

I am every bit as concerned, however, about various manifestations of hatred and cruelty that are grounded, not in Islamic fundamentalism, but in an equally distorted brand of Christian fanaticism. (The word “fanatic,” interestingly, has its roots in the Latin word “fanaticus,” which can be translated “insanely responding to a misunderstood deity.”) Consider these words recently preached by a Christian pastor in northern California whose name and whose church’s name I prefer not to include. (I will say only that the church describes itself as an “independent, fundamental, soul winning, separated, King James Bible believing church”):

People say, ‘Well, aren’t you sad that 50 sodomites died?’ Here’s the problem with that. It’s like the equivalent of asking me, ‘Hey, are you sad that 50 pedophiles were killed today?’ Um, no. I think that’s great. I think that helps society. You know, I think Orlando, Florida is a little safer tonight. The tragedy is that more of them didn’t die. The tragedy is—I’m kind of upset that he didn’t finish the job…I wish the government would round them all up, put them up against a firing wall, put a firing squad in front of them, and blow their brains out.

Another pastor from Arizona posted the following comments in a recent YouTube video:

The Christ-followers I know, even the ones who hold strong convictions about what they believe to be the sinfulness of homosexual practice, would loudly repudiate such teachings. The fact that such teachings exist within the body of Christ, however, makes clear that Islam does not hold a theological monopoly on religious hatred and violence.  I do not mean to suggest a direct comparison between Christianity and Islam in this regard, since such a comparison would no doubt invite an unwanted and unnecessary debate. What cannot be debated, however, is that Christianity is no stranger to various shades and gradations of the hatred articulated by the pastors quoted above. History is all-too-peppered with examples of the name of Jesus being co-opted by determined souls with malicious agendas.

How, then, do I want to respond in the aftermath of the Orlando mass shooting? How do I want to live in a world where people so frequently allow their religion to become an unholy fuel for rigid dichotomies and pathological animosity? Those are questions that I continue to ponder in deep prayer, with sighs too deep for words. Here is what I am discerning thus far:

Where was God when the gunfire began in the wee hours of Sunday morning? God was right there, in the heart of that nightclub. God was right there, in the thick of it all, feeling the agony of every gunshot wound; sharing the anguish of every tear; hearing the desperation of every panicked outcry; weeping over the sadness of every tragic death. Because that is who God is. Intimate. Personal. Vulnerable. Emotional. Incarnational. Wounded. Broken. Crucified.

Then, when the weeping stops for a while, God will still be right there, gradually but steadily leading a devastated people into a new season of hope and redemption—leading people out of death into new life.

3 thoughts on “In the Aftermath of Orlando’s Atrocity”