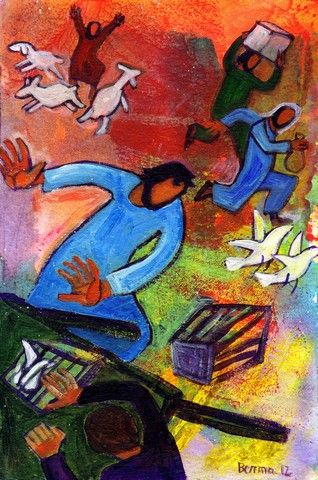 It is an unsettling image, isn’t it?  I am speaking of the image of Jesus cleansing the Jerusalem temple, turning over the tables, and chasing out the moneychangers. Here is how Scripture describes it:

In the temple, he found people selling cattle, sheep, and doves, and the money changers seated at their tables. Making a whip of cords, he drove all of them out of the temple…and overturned their tables. (John 2:14-15)

Throughout my years of ministry, whenever people, particularly men, have approached this moment in Scripture, they have often seen it as the one time in the Bible when Jesus became a real “man’s man.” I call it the (Sylvester) Stallonification of Jesus. I once heard a man put it this way in a Bible study:

If I saw this kind of Jesus more often in the Bible—you know, the kind of Jesus who roughs up his enemies instead of telling us to love them all the time—I’d find it a whole lot easier to follow him.

The danger in this sort of thinking, of course, is that it can lead a person to use a Scripture like this to justify his own oafishness and his own bad manners. “Look, Jesus got angry! So can I! Jesus turned over the tables in God’s house, so why can’t I throw the ottoman through the window in MY house!”

What a dreadful thing it is to reduce a Scripture like this to nothing more than a justification of unhealthy anger or a validation of distorted masculinity. Jesus, after all, did not need this moment of dynamic anger to validate his personhood. His wholehearted identity as a man was already fully on display throughout his life and ministry. Never is Jesus any more of a man than when he willingly suffers and dies on a cross for the sake of a fallen world; or when he tenderly weeps over the death of his friend Lazarus; or when he desperately cries over the city of Jerusalem and its sin. Never is Jesus any more of a man than when he welcomes the children to come to him; or when he speaks words of life to a spiritually hurting Samaritan woman beside a water well on a hot afternoon; or when he wraps a towel around his waist and washes his disciples feet as a tangible demonstration of the fact that a new kingdom was in place—a kingdom in which servanthood is valued over power and where humility is valued over advancement.

Jesus’ anger in the temple is not a validation of Jesus’ status as a tough guy. It is rather an indication that some of the accepted rhythms of temple life inspired outrage in the very heart of God—a heart that Jesus represented and incarnated.

At what accepted rhythms was Jesus so angry?

The overarching sin to which Jesus seems to be responding in the temple is not the sin of buying and selling per se. Rather, Jesus seems to be angry about a much bigger issue: specifically, the ease with which people of faith conform to the principles and priorities that govern all the other parts of our fallen world. What does Jesus find when he walks into the temple? He finds business as usual. He finds a superficial (and, presumably, corruptly dehumanizing) commerce between merchant and customer, masking itself as service but fueled by the same kind of interplay that one could find just as easily in the marketplace.

Jesus’ anger reveals his demand that our temples and sanctuaries—both the literal temple of one’s place of worship and the metaphorical temple of the human heart—be transformed through sanctification, in order that they might become settings in which people practice a way of life and community that is unlike anything else the world has to offer. In the sanctified temple, sharing and sacrificial generosity take priority over buying and selling; repentance and forgiveness eclipse manipulation and exploitation; and the shared penchant for profit and pecking order begins to give way to an agapic and Christocentric communion.

Perhaps Jesus’ anger is grounded in his heartbreak over his realization of how frequently God’s people resist the call to function by a different economy, a different set of practices, and a different arrangement of priorities. In the “house of prayer” that God desires and that Jesus came to incarnate, people relate to one another, not as potential buyers and sellers (customers and merchants), but as redeemed spiritual siblings who have been liberated from social and economic hierarchies in order to be able to experience a new and often countercultural engagement (in Greek, “koinonia”).

It is not a hateful anger that Jesus practices. It is an anger emerging from his heart of indefatigable love for this fallen world and its misguided people. It is an anger over the very things that should make me angry.

The question is, will I allow Jesus’ righteous anger to inspire manipulative denial or authentic repentance and redirection?