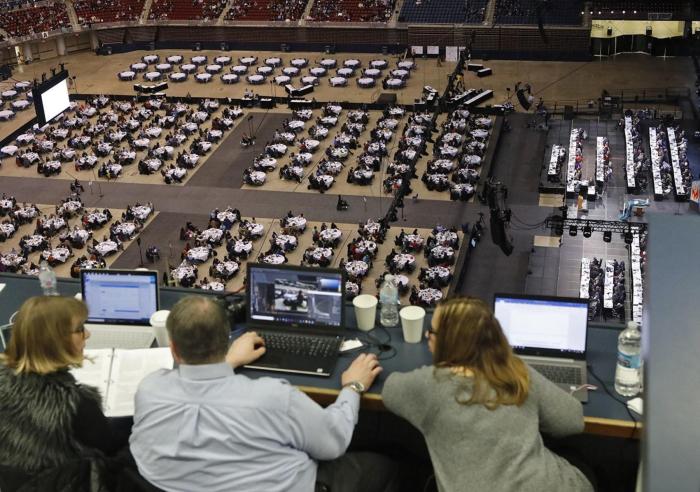 It was a very painful day. Some of us agreed that it felt like there was a spirit of death in the place, no matter where people stood in their convictions. And I felt complicit in it.

The day started with worship, during which we prayed words together that ushered me into a deeper conceptualization of the faith by which I long to walk:

Faith can be cloistered, an in-house debate
An object to study, a reason to hate
Faith can be closets with things put away
A good bit of talking with nothing to say

As we offered those words in unison, it was a moment of personal repentance for me, an opportunity to carry to the cross my tendency to reduce discipleship to a matter of debate—a fresh chance to lay at Jesus’ feet my “good bit of talking with nothing to say.” I quietly prayed that this Christ-follower (and Christ’s church) would become more passionate about seeing faith as a lifetime journey instead of an episodic paying of a spiritual token.

The General Conference spent the entire day engaging in its work as a LEGISLATIVE COMMITTEE. This requires just a moment of procedural explanation. In the work of a more typical General Conference, the delegates are divided into several smaller legislative committees. Each one of these smaller committees is assigned a variety of petitions categorized under a particular ministry area (Church and Society; Higher Education; Faith and Order; Discipleship; Financial Administration; Global Ministries; General Administration; Local Church; Superintendency; etc.) The purpose of each legislative committee in a typical General Conference is to review and refine the legislation assigned to it and then to make a recommendation to the entire General Conference which would then take final action on the legislation.

In this special called session of the General Conference, since all of the legislation is somehow related to deliberation about the denomination’s Way Forward, the decision was made to have just one legislative committee to which all of the delegates would be assigned. In other words, the plan was for the entire General Conference to become a legislative committee for a designated period of time, so that all of the delegates could work on refining the legislation and then vote on what legislative recommendations to carry into the plenary session.

Today, the General Conference engaged in its work as a legislative committee, addressing all of the legislation entrusted to its care. The deliberation and debate were frequently difficult and, at times, excruciatingly painful. The delegates, some with extraordinary vulnerability, all with passionate conviction, shared their stories, their hopes, their fears, and their perspectives, all for the purpose of determining legislative recommendations that will demand final action at tomorrow’s plenary session.

Here is where it gets painful.

As a legislative committee, delegates ultimately took the following actions:

What am I able to say about all of this by way of personal reflection? Not much at this point. I am weary and burdened—even broken—tonight.

Many traditionalist United Methodists view today’s legislative actions as a necessary preservation of what they believe to be a timeless Biblical teaching on marriage and sexuality. (I am praying, however, that their hearts will not permit them to rejoice, given the devastation that others in the denomination are experiencing.)

All evening long, I have been reaching out to people in my life who most likely experienced today’s legislative actions as something hurtful. I encourage you to be attentive to those same people in your life. They are there, after all, probably somewhere nearby, hurting and uncertain, wondering if you see them—really see them—and wondering if you really care.

I am not inviting debate with this post (since there has been enough of that already). I guess more than anything else, I am inviting your desperate prayer for the United Methodist tribe. Irrespective of your theological stance, allow yourself to be heartsick, tearful, and undone by the anguish of a church that is fractured but hopeful; broken but beautiful; sinful but messily and awkwardly sanctified.